What is it about?!

Some societies have the opportunity to freely express their opinion, to ask questions, to explore and to discover facts either through books, radio stations, social networking media, cinematographic media or other. Since the democratic revolutions took place, these societies secured freedoms of expression, which allowed for the representations of historical events to spread even more than before in and across countries.

Of course, who chooses which event is important (and which one is unimportant), and thus, what is to be communicated to society, depends on authorities, such as the state, organized religion, science, etc. These authorities often determine what becomes the official History. Here, speaking about “history’, the capital H / non-capital h refers to the question of who has the right to produce official histories, and to decide what (and who) shall be remembered.

History (with capital H) is problematic since history is much richer and many important events are reduced to the position of unofficial history. Giving more importance to history (non-capital h) allows avoiding dominant ideologies and hegemonic discourses, and supports historical diversity. If a person does an act, or poses a question, or makes an announcement on one day that affects a number of people, this act is important enough to be considered a historical moment. Afterwards, people might still remember this moment, turning it into history. This can be a revolutionary act, or an utterance from one single person, strong enough to be listened by some people and not to be stopped. Whether it is important or not, all the facts are worth being perceived as historical. Even for a society where the state chooses not to consider it as a History, people can resist and remain responsible for what history is.

The project’s intervention-interference takes place at Nicosia’s public spaces and invites pedestrians to participate in it, by listening to recorded historical events and using painting techniques to express their interpretations. The main idea behind the audio fragment being played is to make visible the emotional outcome of the person’s contact with the historical event(s). After connecting to a selection of Historical announcements, related to war, peace, science, arts, technology, music, sports, medicine etc. in different languages, the listeners who come in contact with these fragments are then invited to express their thoughts and impressions through painting. At first, the listeners do not know what the announcements are about. Only later is this information shared.

Painting is the imprinting medium of the participants’ feelings or thoughts while they are listening to the material. Choosing a color and different kinds of materials, the participant creates an emotional translation of the audio fragment(s). Each color and material represents an emotion, a thought, a reaction, … This project is trying to evoke the participants’ thoughts through sound, and inviting them to express themselves through painting instead of using writing, papers, books, speaking or sharing of opinions. The project is an open invitation for participating in one of Nicosia’s public place. The project works towards the democratization of History, opening up official narratives and giving people a means of expression in the narration of history.

Olga: You have been selected to take part in R! with a particular work, but what characterizes your art more in general?

Elena: I am a musician with an educational background in music technology and acoustics. That is where my interest in sound derives from. Artistic forms such as painting are rather a hobby for me. For this reason, I have also decided to work on this project together with the artist Mathieu Devavry.

Elena: Participation and power are central to my project, but especially the concept of participation. Without the people taking part, this would not work out. We need people to come, express themselves and their voices, think and paint freely without anyone judging them. This project does not only depend on them, it is created by them.

Democracy and power do matter, but without participation, the project becomes obsolete, just as a democratic system would without its citizens. The intervention may also relate to democracy as it represents the freedom of the people to say, or in this case, to paint what they think and feel about the voices they hear on the audiotapes.

I see further elements that reflect about democracy. The very first act from me, being able to select these audio-files and get access to that information represents already something that characterizes a democracy. I am free to listen to the music, enjoy the art, or read the scientific article that I want to. And this enables me to use the information with other people who have also the power to say what they think and what they want in the ways they decide to do it. It is a domino-chain of what living in a democracy means.

Olga: In “What is it about”, creation takes place on both individual level as well as within the context of a group. Do you work with this tension between the individual and the collective?

Olga: You seem to highlight the importance of the senses and/or emotional communication forms, like listening, feeling into one’s emotional response and depicting it through painting. Why is it important for your work?

Elena: It is not a typical form of expression. People do not have to think rationally in this intervention. In that way, it becomes something that enables them to directly express emotional and felt responses. I could have also made them listen to tapes and asked them to tell us what they think. But this would be the way people are always obliged to communicate. I wanted to enable them to express another point of view.

Olga: In your intervention, the distinction between artist and audience collapses, at least to some degree. The citizen becomes also an artist. The artist’s power to control the artwork seems to shrink, the participant’s power position as an active co-creator rises. Is this correct? And if so, why does it matter for your art?

Elena: I would not necessarily say that the distinction collapses. The artist still remains in his/her role. Mathieu and I are there to guide the participants. We instruct them, showing which colors they can use and we give the ideas about how to do it. Of course, the participants are free to express themselves. But this is still happening parallel to and based on our guidance. It is a collaboration between the artists and the participants who become artists in the process. It might be called a collaborative model, but it is not a setting where all the distinctions between artist and audience disappear.

Olga: Do you see a connection between the relationship of guidance and freedom in your project and democratic practice more generally?

Elena: Even in a democratic system, we cannot determine what we are exposed to, which sounds we get to hear and what information we get, and what remains unknown to us. The audio-files themselves that the participants get to hear are often central political moments where wars are announced, while some others are just sound. For some participants, it might be the first time to be able to react on those audiotapes, the first time to express what they feel and what they want to say about them, whether it is happiness, sadness, and another emotion. All of these can be expressed artistically through the intervention.

Olga: It seems that you point at a power imbalance with your project. There are authorities who decide what should be understood as History, with a capital letter, and then, there are the citizens who are only listening to what the authorities expose them to. Does your project address this imbalance, or even change something about it?

Elena: When authorities decide what History is, the community is always informed about everything that is based on these decisions. But at the same time, it is still in the community’s or the individual’s hands to decide if it’s really important for them.

In my project, the participants can decide what they perceive as historical or not, and it is entirely their choice to react according to this decision. But I am not changing the power imbalance that exists. Through the project, I am mostly trying to figure out to what degree this power imbalance exists, observing what happens when people get to choose how to react to information they are exposed to.

Olga: What role does empowerment of the citizens play in your project?

Elena: Citizens gain a central role. The role of every participant is to develop a dialogue with the information he/she gets, either through art or at the end, by discussing it with the other participants. The dialogue develops at the later stage when the participants get to know the meaning of the audiotapes. I hope that this will be a way for the citizen to understand that it is possible to share their concerns, opinions, and truths. 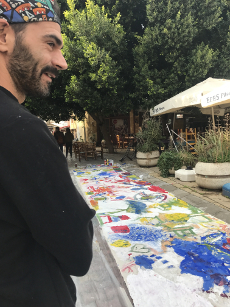 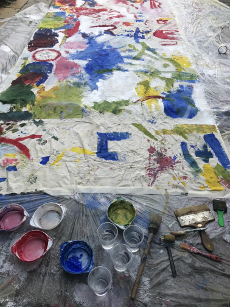 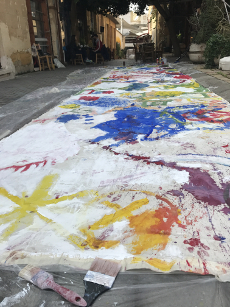 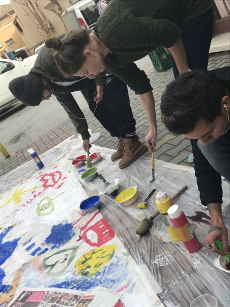 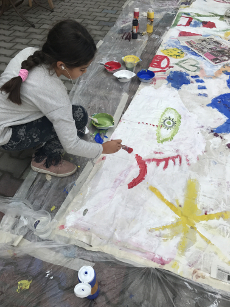 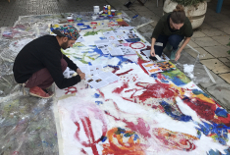 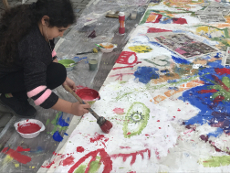 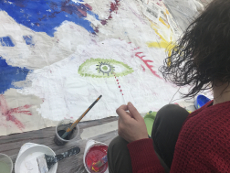 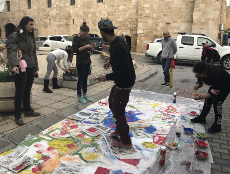 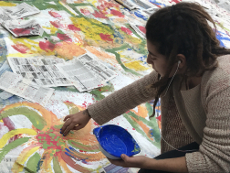 What is it about?! video by Elena Volina and Mathieu Devavry